Palpable fear is said to have gripped River State as the state government failed to appear before the National Boundary Commission in Abuja on the scheduled date, Thursday, August 6, following the intensified efforts by the government of Imo State led by Governor Hope Uzodimma towards recovering oil wells lost to the neighbouring state.

On its part, the Imo State Government on Thursday appeared before the Commission and submitted sensitive documents to the Commission, including the Survey Plan of the state.

Imo State and her neigbouring Rivers State are in a protracted battle over oil wells belonging to the state but for which Rivers State receives monthly allocation and other benefits.

Sources disclosed that the Rivers State Government had frustrated previous efforts to resolve the issue, but with the intensified efforts of the Uzodimma led government towards recovering the oil wells, Rivers State is said to be in fear that Imo State is most likely going to get the oil wells back.

The Deputy Governor of Imo State, Prof Placid Njoku, who is also the Chairman of the Imo State Boundary Commission, led a delegation to submit sensitive documents to the National Boundary Commission in Abuja on Thursday on behalf of the state government.

The Deputy Governor urged the National Boundary Commission to rise to the occasion and give justice to the people of Imo State who have suffered untold hardship over the years as a result of the brazen denial of their God-given wealth which should have been used for their development but had been in the hands of the wrong state instead.

Lending his voice, the SA and Coordinator Oil and Gas, Rt. Hon. Goodluck Nanah Opiah, urged the National Boundary Commission to ensure that Rivers State attends the next meeting, stressing that the timetable earlier prepared for the submission of documents by the two states should be reviewed.

In an interview with our correspondent at the end of the meeting, Opiah said that Governor Hope Uzodimma was determined to recover all the lost oil wells lost to neighbouring states. He said it amounted to grave injustice that oil wells belonging to the state were in the hands of another state while the true owners of the wealth wallow in penury.

According to him, the loss of the oil wells to neighbouring states was part of the reasons for the low production of oil by the state, expressing optimism that the state was on the right track towards recovering the lost oil wells. 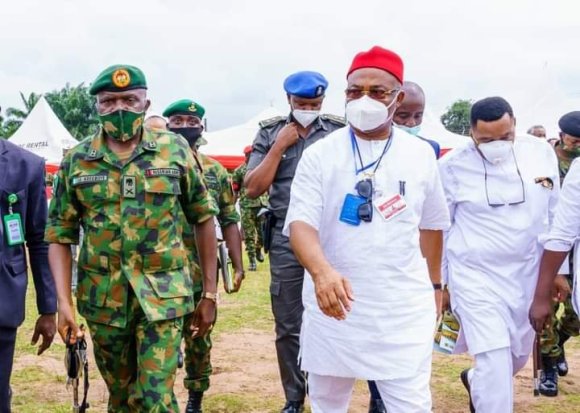